The Elliott wave principle is a form of technical analysis that finance traders use to analyze financial market cycles and forecast market trends by identifying extremes in investor psychology, highs and lows in prices, and other collective factors. Ralph Nelson Elliott(1871–1948), a professional accountant, discovered the underlying social principles and developed the analytical tools in the 1930s. He proposed that market prices unfold in specific patterns, which practitioners today call "Elliott waves", or simply "waves". Elliott published his theory of market behavior in the book The Wave Principle in 1938, summarized it in a series of articles in Financial World magazine in 1939, and covered it most comprehensively in his final major work, Nature's Laws: The Secret of the Universe in 1946. Elliott stated that "because man is subject to rhythmical procedure, calculations having to do with his activities can be projected far into the future with a justification and certainty heretofore unattainable. The empirical validity of the Elliott wave principle remains the subject of debate. By analyzing closely 75 years worth of stock data, Elliott discovered that stock markets, thought to behave in a somewhat chaotic manner, actually didn’t.

According to him, the market traded in repetitive cycles, which he pointed out were the emotions of investors caused by outside influences (ahem, CNBC, Bloomberg, ESPN) or the predominant psychology of the masses at the time. Elliott explained that the upward and downward swings in price caused by the collective psychology always showed up in the same repetitive patterns.

He believes that, if you can correctly identify the repeating patterns in prices, you can predict where price will go (or not go) next.

The Elliott Wave Principle posits that collective investor psychology, or crowd psychology, moves between optimism and pessimism in natural sequences. These mood swings create patterns evidenced in the price movements of markets at every degree of trend or time scale.

In Elliott's model, market prices alternate between an impulsive, or motive phase, and a corrective phase on all time scales of trend, as the illustration shows. Impulses are always subdivided into a set of 5 lower-degree waves, alternating again between motive and corrective character, so that waves 1, 3, and 5 are impulses, and waves 2 and 4 are smaller retraces of waves 1 and 3. Corrective waves subdivide into 3 smaller-degree waves starting with a five-wave counter-trend impulse, a retrace, and another impulse. In a bear market the dominant trend is downward, so the pattern is reversed—five waves down and three up. Motive waves always move with the trend, while corrective waves move against it.

An impulse wave pattern is a technical trading term that describes a strong move in a financial asset's price coinciding with the main direction of the underlying trend. It is used frequently in discussion of the Elliott Wave theory, a method for analyzing and predicting financial market price movements. Impulse waves can refer to upward movements in uptrends or downward movements in downtrends. 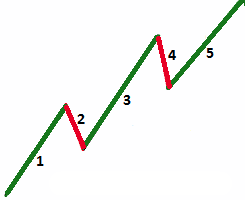 1. Wave 1: The stock makes its initial move upwards. This is usually caused by a relatively small number of people that all of the sudden (for a variety of reasons, real or imagined) feel that the price of the stock is cheap so it’s a perfect time to buy. This causes the price to rise.

2. Wave 2: At this point, enough people who were in the original wave consider the stock overvalued and take profits. This causes the stock to go down. However, the stock will not make it to its previous lows before the stock is considered a bargain again.

3. Wave 3: This is usually the longest and strongest wave. The stock has caught the attention of the mass public. More people find out about the stock and want to buy it. This causes the stock’s price to go higher and higher.

4. Wave 4: Traders take profits because the stock is considered expensive again. This wave tends to be weak because there are usually more people that are still bullish on the stock and are waiting to “buy on the dips.”

5. Wave 5: This is the point that most people get on the stock and it becomes the most overpriced.

Corrective waves are a set of financial asset price movements associated with the Elliott Wave theory of technical analysis. This theory posits that security price movements are broken up into two types of waves: impulse waves and corrective waves. These two types of waves can be used to discern price trends of securities. Within a wave pattern, impulse waves move with the trend at one-larger degree while corrective waves move in the opposite direction. The 5-wave trends are then corrected and reversed by 3-wave countertrends. Letters are used instead of numbers to track the correction.

According to Elliott, there are 21 corrective ABC patterns ranging from simple to complex but the most common fall into four main categories:

Zig-zag formations: A single zigzag in a bull market is a simple three-wave declining pattern labeled A-B-C and subdividing 5-3-5. The top of wave B is noticeably lower than the start of wave A.

Occasionally zigzags will occur twice, or at most, three times in succession, particularly when the first zigzag falls short of a normal target. In these cases, each zigzag is separated by an intervening "three" (labeled X), producing what is called a double zigzag or triple zigzag. The zigzags are labeled W and Y (and Z, if a triple). 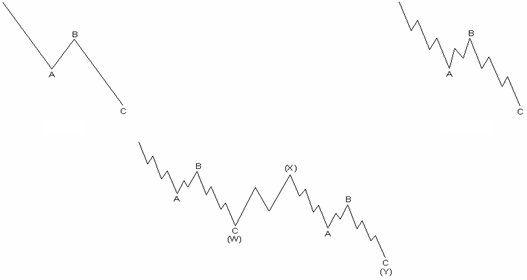 The Flat Formation: A flat correction differs from a zigzag in that the subwave sequence is 3-3-5. Since the first actionary wave, wave A, lacks sufficient downward force to unfold into a full five waves as it does in a zigzag, the B wave reaction seems to inherit this lack of countertrend pressure and, not surprisingly, terminates near the start of wave A. Wave C, in turn, generally terminates just slightly beyond the end of wave A rather than significantly beyond as in zigzags.

Flat corrections usually retrace less of preceding impulse waves than do zigzags. They participate in periods involving a strong larger trend and thus virtually always precede or follow extensions. The more powerful the underlying trend, the briefer the flat tends to be. Within impulses, fourth waves frequently sport flats, while second waves rarely do.

Three types of 3-3-5 corrections have been identified by differences in their overall shape. In a regular flat correction, wave B terminates about at the level of the beginning of wave A, and wave C terminates a slight bit past the end of wave A. Far more common, however, is the variety called an expanded flat, which contains a price extreme beyond that of the preceding impulse wave. In expanded flats, wave B of the 3-3-5 pattern terminates beyond the starting level of wave A, and wave C ends more substantially beyond the ending level of wave A.

In a rare variation on the 3-3-5 pattern, which we call a running flat, wave B terminates well beyond the beginning of wave A as in an expanded flat, but wave C fails to travel its full distance, falling short of the level at which wave A ended. There are hardly any examples of this type of correction in the price record.

Triangles are overlapping five wave affairs that subdivide 3-3-3-3-3. They appear to reflect a balance of forces, causing a sideways movement that is usually associated with decreasing volume and volatility. Triangles fall into four main categories. These illustrations depict the first three types as taking place within the area of preceding price action, in what may be termed regular triangles. However, it is quite common, particularly in contracting triangles, for wave b to exceed the start of wave a in what may be termed a running triangle. Double threes and triple threes: Elliott called sideways combinations of corrective patterns “double threes" and “triple threes." While a single three is any zigzag or flat, a triangle is an allowable final component of such combinations and in this context is called a "three." A double or triple three, then, is a combination of simpler types of corrections, including the various types of zigzags, flats and triangles. Their occurrence appears to be the flat correction's way of extending sideways action. As with double and triple zigzags, each simple corrective pattern is labeled W, Y and Z. The reactionary waves, labeled X, can take the shape of any corrective pattern but are most commonly zigzags. Figures 20 and 21 show two examples of double threes. 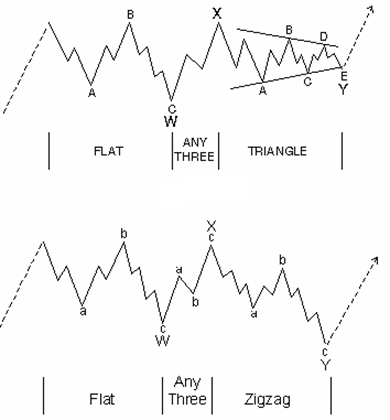 Do you see how Waves 1, 3, and 5 are made up of a smaller 5-wave impulse pattern while Waves 2 and 4 are made up of smaller 3-wave corrective pattern? These are fractals. Always remember that each wave is comprised of smaller wave patterns. Okay, to make things much clearer, let’s see how an Elliott Wave looks in real life. As you can see, waves aren’t shaped perfectly in real life. You’ll also learn it’s sometimes difficult to label waves. But the more you stare at charts the better you’ll get.