What is the US Dollar Index (USDX)?

The U.S. dollar index allows traders to monitor the value of the USD compared to a basket of select currencies in a single transaction. It also allows them to hedge their bets against any risks with respect to the dollar. The index is currently calculated by factoring in the exchange rates of six major world currencies, which include the euro, Japanese yen, Canadian dollar, British pound, Swedish krona and Swiss franc. The euro holds the most weight versus the dollar in the index, constituting about 58 percent of the weighting followed by the yen with about 14 percent.

The US Dollar Index Currency Basket

The U.S. Dollar Index (USDX, DXY, DX) is an index (or measure) of the value of the United States dollar relative to a basket of foreign currencies,  often referred to as a basket of U.S. trade partners' currencies. The Index goes up when the U.S. dollar gains "strength" (value) when compared to other currencies.

The index is maintained and published by ICE (Intercontinental Exchange, Inc.), with the name "U.S. Dollar Index" a registered trademark. It is a weighted geometric mean of the dollar's value relative to following select currencies: How to Read the US Dollar Index

Just like any currency pair, the US Dollar Index (USDX) even has its own chart. 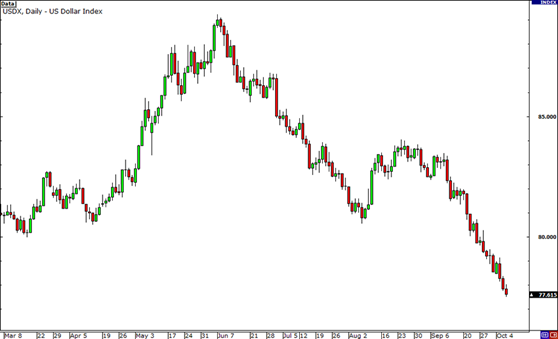 First, notice that the index is calculated 24 hours a day, five days a week. Also, the US Dollar Index (USDX) measures the dollar’s general value relative to a base of 100.000.

There is also another kind of dollar index used by the Federal Reserve. It is called the “trade-weighted U.S. dollar index“.

The trade-weighted US dollar index, also known as the broad index, is a measure of the value of the United States dollar relative to other world currencies. It is a trade weighted index that improves on the older U.S. Dollar Index by using more currencies and the updating the weights yearly (rather than never). The base index value is 100 in Jan 1997.

From strongest to weakest, here is the current weighting (in percentage) of the index(as of February 12, 2017):

The main difference between the USDX and the trade-weighted U.S. dollar index is the basket of currencies used and their relative weights. The trade-weighted index includes countries from all over the world, including some developing countries.

Given how global trade is developing, this index is probably a better reflection of the dollar’s value across the globe.

How to Use the USDX for Forex Trading

The U.S. Dollar Index (often marked as DXY or USDX) is widely used in Forex. The U.S. dollar index is an indicator of the U.S. currency's strength. It measures the value of the dollar relative to a basket of major currencies: Euro, Yen, Canadian Dollar, British Pound, Swedish Krona and the Swiss Franc. Target weights of index components are provided below: the euro (57.5%), the Japanese yen (13.6%), the British pound sterling (11.9%), the Canadian dollar (9.1%), the Swedish krona (4.2%) and Swiss franc (3.6%).

Taking into account that the dollar index is strongly shifted towards European currencies, it significantly lowers the share of the Canadian dollar. In addition, this index completely ignores the currencies of the Asia-Pacific region, including S. Korea, Australia, Taiwan and China.

The dollar index (DXY) was created by JP Morgan in 1973 and since that time it was updated only once when the several European currencies were subsumed by the euro. The dollar index can be used to analyze currency pairs in the forex market, just as stock market investors use stock indexes to determine the general direction of the trend in the market.

If you trade currency pairs which involve U.S. dollar, the dollar index will give an idea of the relative strength of the dollar to currency pairs such as EURUSD, GBPUSD, USDCHF. We can safely say that USDX has a correlation with the above-mentioned currency pairs and this indicator can be used by the trader as an additional indicator in the analysis of the market.

The dollar index is influenced by common factors that affect currencies, such as: fiscal and monetary factors, interest rates, inflation and foreign trade. That is why the analysis of the dollar index can help you for developing your own long-term trading strategy.

The first part of the smile shows the U.S. dollar benefiting from risk aversion, which causes investors to flee to “safe-haven” currencies like the dollar and the yen. Since investors think that the global economic situation is shaky, they are hesitant to pursue risky assets and would rather buy up the less risky U.S. dollar regardless of the condition of the U.S. economy.

Scenario #2: USD Weakens to New Low Due to Weak Economy

Dollar drops to a new low. The bottom part of the smile reflects the lackluster performance of the Greenback as the U.S. economy grapples with weak fundamentals. The possibility of interest rate cuts also weighs the U.S. dollar down. This leads to the market shying away from the dollar.

The dollar appreciates due to economic growth. In other words, the greenback begins to appreciate as the U.S. economy enjoys stronger GDP growth and expectations of interest rate hikes increase. This theory appears to have been in play when the 2007 financial crisis began:

The dollar got a huge boost at the peak of the global recession - That’s phase 1.

The market eventually bottomed out in March 2009, investors suddenly switched back to the higher yielding currencies - That’s phase 2.