Leonardo Fibonacci was a famous Italian mathematician that discovered a simple series of numbers that created ratios describing the natural proportions of things in the universe.

Fibonacci extensions are a tool that traders can use to establish profit targets or estimate how far a price may travel after a retracement/pullback is finished. Extension levels are also possible areas where the price may reverse. Extensions are drawn on a chart, marking price levels of possible importance. These levels are based on Fibonacci ratios (as percentages) and the size of the price move the indicator is being applied to. Common Fibonacci extension levels are 61.8%, 100%, 161.8%, 200%, and 261.8%.

This is a daily chart of AUD/USD showing an uptrend Now, let’s look at what happened after the Swing High occurred. Price pulled back right through the 23.6% level and continued to shoot down over the next couple of weeks. It even tested the 38.2% level but was unable to close below it. Later on, around July 14, the market resumed its upward move and eventually broke through the swing high. Clearly, buying at the 38.2% Fibonacci level would have been a profitable long-term trade!

Now, let’s see how we would use the Fibonacci retracement tool during a downtrend. Below is a chart of EUR/USD. Let’s take a look at what happened next. The market did try to rally, stalled below the 38.2% level for a bit before testing the 50.0% level.

If you had some orders either at the 38.2% or 50.0% levels, you would’ve made some mad pips on that trade. In these two examples, we see that price found some temporary forex support or resistance at Fibonacci retracement levels.

A Bollinger Band® is a technical analysis tool defined by a set of lines plotted two standard deviations (positively and negatively) away from a simple moving average (SMA) of the security's price but can be adjusted to user preferences. Bollinger Bands® were developed and copyrighted by famous technical trader John Bollinger. A Bollinger Band® technical indicator has bands generally placed two standard deviations away from a simple moving average. In general, a move toward the upper band suggests the asset is becoming overbought, while a move close to the lower band suggests the asset is becoming oversold. Since standard deviation is used as a statistical measure of volatility, this indicator adjusts itself to market conditions.

Bollinger bands® are excellent tools for measuring volatility because that is exactly what it was designed to do. Bollinger bands® are basically 2 lines that are plotted 2 standard deviations above and below a moving average for an X amount of time, where X is whatever you want it to be.

When the bands contract, it tells us that volatility is LOW.

When the bands widen, it tells us that volatility is HIGH. In the chart depicted below, Bollinger Bands® bracket the 20-day SMA of the stock with an upper and lower band along with the daily movements of the stock's price. Because standard deviation is a measure of volatility, when the markets become more volatile the bands widen; during less volatile periods, the bands contract. One thing you should know about Bollinger Bands® is that price tends to return to the middle of the bands. That is the whole idea behind the “Bollinger Bounce.” As you can see, the price settled back down towards the middle area of the bands. What you just saw was a classic Bollinger Bounce. The reason these bounces occur is because Bollinger bands® act like dynamic support and resistance levels. The longer the time frame you are in, the stronger these bands tend to be. Many traders have developed systems that thrive on these bounces and this strategy is best used when the market is ranging and there is no clear trend.

The “Bollinger Squeeze” is pretty self-explanatory. When the bands squeeze together, it usually means that a breakout is getting ready to happen. Bollinger Bands® Squeeze is a great chart pattern that enables you to locate strong and profitable trade setups. When the market becomes too slow and there is a low volatility, the price moves sideways and the Bollinger upper and lower bands become so close to each other 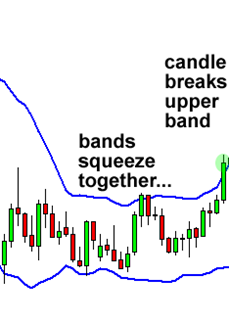 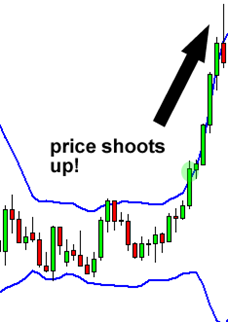