Harmonic price patterns take geometric price patterns to the next level by using Fibonacci numbers to define precise turning points. Unlike other common trading methods, Harmonic trading attempts to predict future movements. Let's look at some examples of how harmonic price patterns are used to trade currencies in the forex market. Harmonic trading combines patterns and math into a trading method that is precise and based on the premise that patterns repeat themselves. At the root of the methodology is the primary ratio, or some derivative of it (0.618 or 1.618). Complementing ratios include: 0.382, 0.50, 1.41, 2.0, 2.24, 2.618, 3.14 and 3.618. The primary ratio is found in almost all natural and environmental structures and events; it is also found in man-made structures. Since the pattern repeats throughout nature and within society, the ratio is also seen in the financial markets, which are affected by the environments and societies in which they trade. By finding patterns of varying lengths and magnitudes, the trader can then apply Fibonacci ratios to the patterns and try to predict future movements. The trading method is largely attributed to Scott Carney, although others have contributed or found patterns and levels that enhance performance. There are several Harmonic Price Patterns:

Each turning point (A, B, C, and D) represents a significant high or significant low on a price chart. These points define three consecutive price swings, or trends, which make up each of the three pattern "legs." These are referred to as the AB leg, the BC leg, and the CD leg.

The Three-Drives pattern has its origins in Elliotology and was referred by Robert Prechter in his famous book, “Elliott Wave Principle.” The Three Drive pattern is really an offshoot of the wave structures that typified price movements and were detailed in the Wave Principle. It can be described in brief as a five-wave structure that follows the Fibonacci rules for projecting retracements and extensions within its formation.

Like the ABCD, this pattern too appears in a bearish or bullish mode. The bearish pattern is a rising five-wave structure of which point A is a Fibonacci 61.8% retracement of leg (or, drive) 1. Thereafter, drive 2 is a 127.2% extension of the corrective move ending at A. Drive 2 also sees a corrective 61.8% retracement to point B. Drive 3 is the 127.2% extension of the corrective move ending at B. Traders gear up for the anticipated short trade when resistance comes up during the third drive, marking an end of that. The bullish pattern is a falling five-wave structure of which point A is a Fibonacci 61.8% retracement of leg (or, drive) 1. Thereafter, drive 2 is a 127.2% extension of the corrective move ending at A. Drive 2 also sees a corrective 61.8% retracement to point B. Drive 3 is the 127.2% extension from point B, and is the recommended buying point. Traders gear up for the anticipated long trade as soon as support is realized in the course of the third drive, marking the end of that drive. H.M. Gartley introduced Gartley patterns in his book "Profits in Stock Markets". This pattern is also called Gartley 222 patterns as it was described on the page # 222 of the mentioned book. Gartley pattern is basically an ABCD pattern appearing during a bullish or bearish trend and it indicates the possibilities that the correction of the ongoing trend may be over and the initial trend may resume.

In simple words the Gartley patterns can be summarized as follows:

Starting with the swing high or low, each leg is marked by a letter. There is a total of five swing points named as X, A, B, C and D. In some harmonic patterns, you will only find four, namely the X, A, B and C. The Crab pattern is distinct due to its sharp movement in the CD leg. This is usually a 1.618% Fibonacci retracement of the XA leg, the initial part of the Crab pattern. 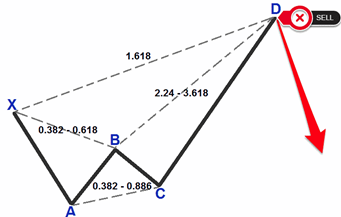 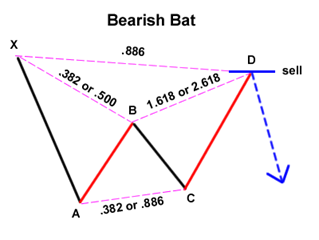 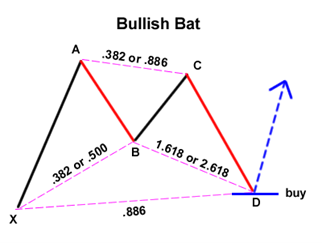 The Bat pattern is similar to the Gartley pattern in that it is a retracement and continuation pattern that occurs when a trend temporarily reverses its direction but then continues on its original course. It gives you the opportunity to enter the market at a good price, just as the pattern ends and the trend resumes. The Bat is defined by the .886 retracement of move XA as Potential Reversal Zone. The Bat pattern has the following qualities:

CD should be .886 retracement of move XA. 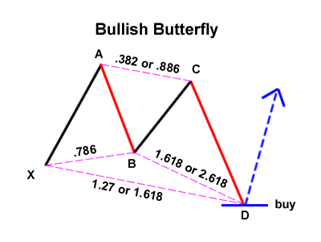 The Butterfly pattern is a reversal pattern composed of four legs, similar to the Gartley and Bat pattern, marked X-A, A-B, B-C and C-D.

The perfect Butterfly pattern is defined by the .786 retracement of move AB with respect to move XA. The Butterfly contains these specific characteristics:

Move AB should be the .786 retracement of move XA.