It’s not enough to only know technical analysis when you trade. It’s just as important to know what makes the forex market move.

Just like behind the trend lines, double tops, and head and shoulder patterns, there is a fundamental force behind these movements. This force is called the news!

Big and small traders all have to depend on the same news to make the market move because if there wasn’t any news, the market would hardly move at all!

Regardless of the technicals, news is the fuel that keeps the forex market going!

Why trade the News?

The simple answer to that question is “To make more money!”

The news is a very important part of the forex market because it has the potential to make it move!

When news comes out, especially important news that everyone is watching, you can almost expect to see some major movement.

Your goal as a forex trader is to get on the right side of the move, but the fact that you know the market will most likely move somewhere makes it an opportunity definitely worth looking at.

Dangers of Trading the News

As with any trading strategy, there are always possible dangers that you should be aware of:

1. Increased levels of volatility and risk

When compared to other realms of investing, forex is well-noted for its extreme levels of volatility. This degree of volatility is only kicked up a notch during important news events, largely because spreads will increase during such time. What this also means is that you are going to need to have your wits about you, as a misstep when a high degree of volatility is active can have a disastrous impact on your forex portfolio.

Slippage is anything but a small issue, with it being more prominent than ever when you enter the forex market to trade during major important news events. Due to the swings in cost, you’ll find that your order price can be quite different to what it may actually cost to put through the trade. Using an example, say you chose to trade USD/JPY during a time in which a very volatile news report reaches the market; the possibility that it could move 100 pips in mere seconds would by no means be uncommon. Through this, you easily can end up taking on massive losses, as an element of control is certainly taken out of your hands.

As you are probably already well aware by now, big market moves have the power to pull the market in both directions. When a major story hits the forex newswires, it can often send the market flying in one direction, only to whip it back the other way in a flash. What this can mean is that big market moves can really make determining the true market direction difficult at times. Looking at Nonfarm Payroll results as an example, they have the tendency to wreak havoc in the world of forex. For the EUR/USD symbol, this year proved to be particularly tumultuous, as, according to various news reports, it initially threatened to undermine its price, only to then go on and fuel its resilience.

Which News Releases Should I Trade?

Before we even look at strategies for trading news events, we have to look at which news events are even worth trading.

Remember that we are trading the news because of its ability to increase volatility in the short term, so naturally, we would like to only trade news that has the best forex market moving potential.

While the markets react to most economic news from various countries, the biggest movers and most watched news come from the U.S.

With that said, let’s take a look at some of the most volatile news for the U.S. 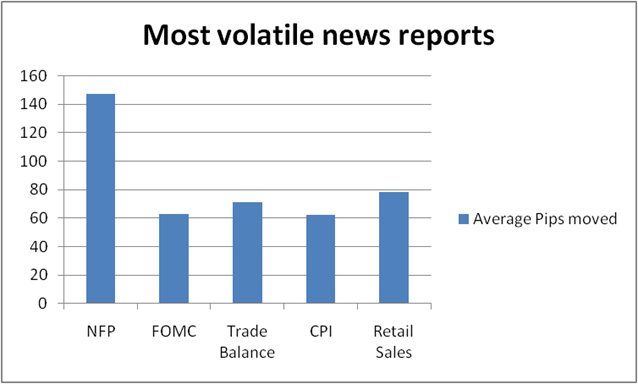 In addition to inflation reports and central bank talks, you should also pay attention to geopolitical news such as war, natural disasters, political unrest, and elections.

Although these may not have as big an impact as the other news, it’s still worth paying attention to them.

Also, keep an eye on moves in the stock market.

There are times where sentiment in the equity markets will be the precursor to major moves in the forex market.

Because news can bring increased volatility in the forex market (and more trading opportunities), it is important that we trade currencies that are liquid: EUR/USD, GBP/USD, USD/JPY, USD/CHF, USD/CAD, AUD/USD.

Remember, because they have the most liquidity, majors pairs usually have the tightest spreads.

Since spreads widen when news reports come out, it makes sense to stick with those pairs that have the tightest spreads to begin with.

2 Ways to Trade the News

There are two main ways to trade the news:

1. Having a directional bias

2. Having a non-directional bias

Directional bias is a trader’s belief that the market will move in a certain direction as a result of specific events – it can be established in a number of different ways.

Establishing a directional bias is often a matter of analysing charts for support and resistance levels and price action. It’s also important to understand market inertia: The market will continue to move in one direction until something causes a break and reverses the tide.

Directional bias plays a huge role in the trend vs counter-trend strategy. Ultimately directional bias will help you choose the direction of the trend and whether you’re going to go long and buy, or go short and sell.

Once you have established a directional bias, psychologically speaking, you will have more confidence executing your trading strategy because you already know what you are looking for.

Having a directional bias means that you are no longer a reactionary trader, but can plan your trades in advance and are less emotionally attached to the markets.

Strategically speaking a high probability setup is one that has been thoroughly prepared in advance and the process of developing a bias is part of that preparation. Establishing a directional bias is a two part process:

1. Forecasting where the price is more likely to go up or down

2. Trigger conditions or the trading rules that confirm your market bias

It’s not enough to establish a directional bias, you will also need to have trading rules to confirm your bias otherwise you may end up being more wrong than right.

Trading is much more about the way we think than it is about entry technique or a trading plan. We think, we analyse and we arrive at a conclusion – which leads to our directional bias. After we arrive at that directional bias, we try to execute our judgement to make a profit.

Directional bias can also be established through the use of technical indicators such as moving averages. In technical analysis, the 200-day Moving Average is considered to be one of the most powerful moving averages.

A non-directional bias is a more common form of trading strategy. With this kind of method, a positive or negative sentiment is removed from the equation. The only expectation is that an important news report will cause a significant move in the market. The direction it moves in is not crucial, just to be there to take advantage of the movement is enough.

With non-directional bias, you have a plan in place to enter a trade, regardless of whether the price will go up or down. You are there to take advantage and make a profit.

How to Trade the News with a Directional Bias

When trading with a directional bias, you keep track of the market consensus and the actual numbers; using the information you have gathered, you expect the market (or stock) to move a certain direction once the news report is released. Trading the news with directional bias can be broken down into 5 simple steps:

1. Before a report comes out, look at trend of that report (example – look at the trend for unemployment rate, stock’s expected earnings, etc) to see if it has been increasing or decreasing, and guage the market sentiment associated with that report.

2. Decide your directional bias. In other words are you long or short that stock/market?

3. At least 15 minutes before the news is about to be released, look at the price movement of that specific stock/market.

4. Take note of highs and lows i.e. know your support and resistance levels. These will become your breakout points.

5. Using the market sentiment and technical information you have gathered in the first 4 steps, set your entry/exit trades.

Let me illustrate these 5 steps with an example. Suppose you want to trade the news associated with Apple’s earnings. You have reports from companies in Apple’s supply chain showing that Apple has increased their demands/orders for microprocessors. You notice that Apple has consistently been beating the earnings estimates. Using such information, you could form a directional bias that you expect the Apple stock to appreciate in value after the earnings report. Now, you start looking at the stock price. You draw supports and resistances associated with the Apple stock. Based on this information, you can make a decision when to enter and exit your trade. For example, you might want to set your entry to be right above the most recent resistance (high level). This way, if the news goes in your favor, the price is most likely going to break through the resistance and put you in a profitable trade. If the news does not go your way and the stock plummets, well you could have profited if you had a non-directional bias strategy, which I will talk about in my next blog post.

It is important to note that when you trade the news, the stock/market is volatile, and depending on your risk tolerance, you should enter your trade with appropriate stop loss. Furthermore, it is important that you understand the concepts behind the news reports for directional bias trading. If you are trading the US Stock market indices such as S&P 500 or Dow Jones Industrial Average (DJIA), the top 5 news reports that move the market are: Non Farm Payrolls (NFP), Trade Balance, Retail Sales, Federal Open Market Committee (FOMC), and Consumer Price Index (CPI).

How to Trade the News with a Non-Directional Bias

1. When trading the major indices (S&P 500 or DJIA), always use the reports that are the most volatile (the 5 news reports mentioned above)

2. At least 20 minutes before news release, look at the range that the price has been fluctuating between. This will give you an idea about your support and resistance levels along with the breakout points.

3. Breakout points should be your entry levels. Once price has crossed these levels, it’s time to buy or sell depending on the direction of the trade.

4. Stop loss should be placed based on your risk tolerance. My recommendation is to put the stop loss somewhere within the range where the price was trading at in step-2.

The diagram below illustrates where you should place your entry, stop losses, and target profits in relation to the breakout points (support/resistance levels) for a non-directional bias news trading.